You got to know when to leave.

A few days ago I was talking to my Father. He’s 88 years young, a World War II Combat Veteran, and grew up during the Great Depression (the 1929 one, not the housing crash of 2008!) At 88, my Father is still as sharp as they come and still to this day regularly gives talks on leadership. As a Civilian Aide, to the Secretary of the Army (CASA) – Emeritus for the State of Pennsylvania, he is daily doing work to assist the Army units of his state. He is known for his powerful and motivating speeches on Veterans and Memorial Day and frankly, there’s no greater American.

He’s battling with the loss of his wife of 52 years. If you’ve read my previous blog on “Warriors learn from Warriors” you know what she has meant to our family. My Father has always provided sound and timely advice (some I’ve taken and as most children do, some I’ve not and I learned the hard way.) We were talking about general topics and we both love sports so we began to talk about the debacle at Penn State University with their Football program and how it’s going to be difficult to rebuild for the incoming coach. We talked about Coach Paterno and how long he has been at the program and by all estimation has done a good job of assisting the players under his charge with graduating and moving on to life beyond football. My father then said to me, “you got to know when to leave.” It’s my father’s opinion that Coach Paterno was there too long, and when you’re an 88 year old WWII Veteran, you have earned the right to your own opinion!

The lesson started here. He went on to say that regardless of the business you are in “you got to know when to leave.” The more I thought about this the more evident how crucial this advice is!! Looking back at my career I retired from the Army at the right time. I still had 4 or 5 good years left in me, but I was healthy, could still compete if I had to, but I chose the right time to start my next career. Looking back at my time working at West Point, I probably stayed there six months to a year too long. I knew I should have made the change but I was comfortable in the job, had the systems down, and as it’s said, could run on auto-pilot. The turbulence hits when you hand off the stick (Murphy’s Law!).

My father talked about all the great work he did for Little League Baseball in Western Pennsylvania. He was inducted into the Pennsylvania Baseball Hall of Fame and even coached a team to the famous Little League World Series played in Williamsport, PA. He had been volunteering and working for this program for years and finally when it was properly funded and moving in the right direction, he bid them a humble farewell. My father said that he always “knew when it was time to go” and “better to go sooner than later.” We always think we can do a little more, add something here or there; we strive for perfection but often times its knowing when to hand the controls over and move on. Many times the legacy is forged in what we do well for a short period of time.

The military has done it right for a long time; commanders stay for an average of two years and then its change of command time. The outgoing commander usually gives the longest speech, thanking those that they have served. The incoming commander usually speaks very briefly, thanking those for the opportunity and normally finishing with “all policies and procedures remain in effect” (stating there won’t be any major changes until he or she has had time to get a handle on the situation.) There is always a reception after the change of command, one which the out-going commander NEVER attends. They get in their car and drive away, happy in the hopes that they’ve done a good job for the men and women under their charge.

Seven months ago my brother-in-law and friends got together and talked about doing the outdoor event known as the Tough Mudder. If you don’t know what this is you can pull it up on a search engine for a better description but basically it’s a 12+ mile, 25+ obstacle course that embodies the name “mud.” You’re wet, cold, muddy and tired for most of the event! It’s truly challenging and when we were talking about doing it I said “if we are spending money (entry fee) to get our asses smoked then we are going to train for this!” Everyone agreed and was on board, and for seven months we trained as individuals, buddy teams, as well as the six man group. Nobody wanted to let the other down and as the designated team captain, the elder statesman, and only former military member I was responsible for developing and implementing most of the work outs. The tougher I made them, the tougher the team battled! Four to six days a week we were training, it even got a point where we were going every day! You name it we did it! From the standard gym blasts, to cross-fit, to my own blower workouts straight from the “Tweedy House of Pain” in Afghanistan. We even jumped in the pool one cold Sunday in full clothes, then rolled in the dirt for the infamous “sugar cookie” then went to the local park as former Army Captain Lona Spisso put us through guerrilla drills. We ran, hiked, swam, biked, and crawled. We carried ruck sacks, water cans, litters, sandbags, rocks and each other. Seven months of training paid off as Saturday the six man team of the Sonoran Desert Warriors completed the Tough Mudder in Mesa, AZ (12.5 miles & 29 obstacles) in just over 3 hours! I’ve done a lot in my military career and have served with some of the bravest men and women our Nation has to offer. I can truly say that I’ve sweat and bled with our Tough Mudder team and I’m proud to call them into the brotherhood!

Tough Mudder complete! Hooah! Now I take the advice of my father and “you got to know when to leave” and as team captain of the Sonoran Desert Warriors I bid my brave mates a humble farewell and I’m now moving on from the team; I pass the torch (Captain’s “C”) to my brother-in-law Sean and I know he will do a great job preparing the team for another competition. I’m not retiring however so you better keep working, I’m planning on entering Team Spisso next year! 🙂

Thank you gentlemen, it’s truly been my Honor!

“For he today who sheds his blood with me shall be my brother.” ~Shakespeare 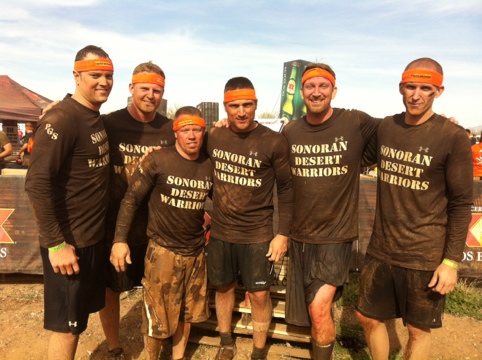 This entry was posted on January 17, 2012, 9:08 pm and is filed under Fitness, Leadership. You can follow any responses to this entry through RSS 2.0. You can leave a response, or trackback from your own site.